In my last post, I concentrated on settling a long time mystery of Amy (Collins) Willis, having the name of Peppers.  Now, I am presenting the evidence I have found regarding Amy’s parents.

The birth record I found for an Amy A. Collins in Cabell County, born 25 Dec., 1854, is the only record I found that closely matches the age of Amy Willis, according to her headstone.  This record clearly states the parents as George P. Collins and Elizabeth Collins.

Up to now, based on all the research I had done, these were the presumed children of George P. Collins and Elizabeth Reynolds:

As you may recall, I found in the 1850 Census for Cabell County, District 10, George P. Collins with an Elizabeth:

By chance, I found a birth record for a Moses A. Collins, born in 1853 in Putnam County to a George and Elizabeth Collins:

Hoping that Moses may have been Amy’s brother, I did a search for Moses in 1860, and found this 1860 Census in Putnam County:

(Notice the “M”s marked in the Color column for V. Warner and M. Warner):

Looking back at the 1850 Census for Cabell County, 1 page previous to George P. Collins and Elizabeth Collins, I found a John Collins with an Abigail Collins, Viletta Warner, Mary Warner, Tabitha and Lewis Carpenter.  I did find a relationship between the Carpenters and the Collins, which could be why Lewis and Tabitha Carpenter are staying with the Collins family:

I then found this…a Paris Collins living with a Peter Fizer family in the 1850 Census for Putnam County, District 46  (Note: Based on information provided by Collins/Fizer researcher, Melissa Fizer Conley, Abigail Collins (nee-Warner) was previously married, and was widowed when she married John Collins. Her previously married name was Fizer.  Also, according to an 1871 War of 1812 Pension application for the widow of John Collins, Abbie Collins, her age is stated as 74 years old, placing her YOB at 1797):

At some point during my research, I found that George’s middle name was Paris, as was told to me by , Melissa Fizer Conley, who has been researching the Fizers and Collins families for the past 20 years.

This greatly helped my research.

I then found this, which helped me even more: 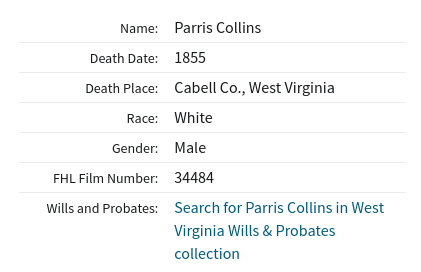 Now we know that George Paris Collins died in 1855.  This explains why I couldn’t find him from 1860 and on, but this still leaves a gap with Elizabeth, his wife.  I did not find Elizabeth again until 1870, living with her parents Ezekiel and Amy Reynolds, with a daughter Victoria and I believe another daughter, Sarah.

So, what does this mean?

The other children of Elizabeth Reynolds, were Thomas C., Victoria, Blackburn & Sarah M., who had a different father or fathers.

On Thomas C. Collins death record, no father is mentioned

I have not found any record for Moses beyond his birth record, and the 1860 Census.

Blackburn Collins was married for 1 year by the 1900 Census, to a woman named Rebecca, 19, and had a daughter named Virgil Lee, 1 yr. old.

There was also the 1901 marriage record for Blackburn Collins, by this time was 34 years old, but stated he was 18 and his new bride was Viola Hatfield.  I have never found Blackburn in the 1910 Census, nor a death record.  I did find a document under Wills for West Virginia in 1916 for the guardianship of Virgie Collins, age 19, infant child of Blackburn Collins, deceased.

I also found no evidence of Sarah M. Reynolds or Collins beyond 1870.

In the 1900 Census for Lincoln County, WV, Elizabeth had 2 grandsons living with her, Winfield and Silas, and she stated that she had only 2 children, and both were not living.  This could match up with the 2 daughters Victoria and Sarah.

Why Elizabeth chose to state that she only had 2 children is unknown, as 2 of her sons were living close by.  Thomas was 1 page previous in the 1900 Census for Lincoln County and Blackburn was 1 page after.

So, these are the facts at hand.  Usually, if we have enough records collected, we can definitively say that someone is the child of Mr. and Mrs. So and So.

Can we say the same for Amy Willis?

I have one more item to present…

To me, genealogical research is akin to finding an old puzzle box in the basement or attic, blowing off the dust, opening up the box, and seeing if you can put the puzzle together.  There are times with old puzzles that there are pieces missing, and if enough pieces are missing, you will not get a complete picture of the puzzle to get a true sense of what it is you are looking at.

Based on the research I’ve done on Amy Willis, I believe I have found a few more pieces to the puzzle, but there is one that stands out among all the others, and the funny thing is, it’s not an actual recorded event such as a birth, or marriage or death.  Simply put, it was just a question…oh, but what a question it was.  So much so, it answered my question…

Is this the family of Amy Willis?

I was doing research on John Henry Collins, whom I presumed was Amy’s brother.  He married a woman by the name of Eliza Ann Waugh, in Lawrence County, Ohio in 1873.  I had found everything I could on him through the regular sources of Ancestry and Newpapers; etc., but did not find any good information that connected him to Amy.

One of my go to moves is to simply do an internet search for a married couple, so that’s exactly what I did.  I did a search on John Henry Collins and Eliza Ann Waugh.  What I came up with took me back to the year 2000, on an Ancestry Message Board.  A woman, whose husband was a descendant of John and Eliza, was providing information regarding John and Eliza and their children.  Then she asked this simple question:

“Do you have any more info on the Pepper story?”

I was dumb struck…this simple question represented to me, the puzzle piece I needed that tied all the other important pieces together, and gave me enough to see a more complete picture.  There was no mention of Amy in the message that was posted.  The message was strictly about John Henry Collins and his family.  Since we know that Amy used the last name of Peppers in 1870 and her marriage record of 1872, in my opinion, there can be no question about it.  Amy and John Henry were brother and sister.  The Pepper story must have been told, handed down and played out through John’s family as it was in Amy’s family.

Again, I must emphasize that these findings are my opinion.  If and when, and until any other records can be found to back this up, this is all we have to go on for now.

As much as it is riddled with gaps and holes of information, the life of Amy Willis is not as vague and mysterious as it once was.

Special thanks to the following family members and researchers of the Collins, Willis and Fizer families:

Of course, my wife Cheryl, whose support and love inspires me everyday!

8 thoughts on “The Less Mysterious Life of Amy Willis or Waiter, Are there any “Peppers” in this?”