Long before there were any technological devices and a means by which they could communicate with one another, there was one form of social media that our ancestors used to stay up-to-date and informed about what was happening in their world, both locally and abroad…it was the power of the printed word, newspapers.

Can you imagine what it must have been like for some of our ancestors that had no means by which to get their hands on one of these prized newspapers?   Not to mention the fact, that there were many of our ancestors that couldn’t even read.   They only had word of mouth to be informed about any local or global events.  For those that could read, and also had the ability to even catch a glimpse of a newspaper, would have been a rare treat indeed!

As time marched on, and progress and education flourished, more of our ancestors got to experience newspapers on a day-to-day basis.

It is often recognized that the first newspaper was the German-language “Relation aller Fürnemmen und gedenckwürdigen Historien”, printed from 1605 onwards by Johann Carolus in Strasbourg.

“Publick Occurrences, Both Foreign and Domestick”, was the first newspaper published in America, printed by Richard Pierce and edited by Benjamin Harris in Boston on September 25, 1690. It contained three printed pages and one blank.

When I first delved into Newspapers.com, there were so many mysteries I knew I wanted to solve, but I wasn’t going to count my chickens…

My very first search resulted in finding out what happened to my g-g-g-grandfather, Jenkin Harris.  I had already been in touch with Sally Reiner, in charge of the Lykens/Wiconisco Historical Society, who sent me a photograph of Jenkin and Jane Harris’s headstones:

So, I knew that Jenkin had passed in 1872.  I went to Newspapers.com and did the following search:

I got the following hit:

I clicked on the link, and this is what I found out: 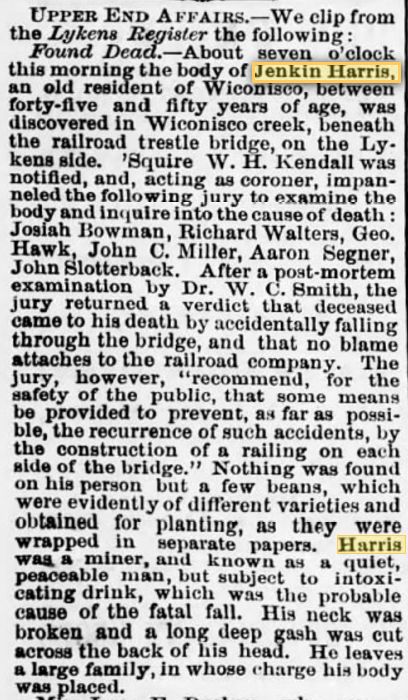 Jenkin Harris fell to his death from a railroad bridge while intoxicated.

My next search involved my g-g-grandfather, Edward Harris, Jenkin’s son.  I went back to the main search page and modified the search criteria, because I knew where Edward had lived most of his life after coming to America.  As you can see, I used the search criteria to include Edward’s name and the town name with the word AND:

The results were many.  Below, I have put some of the results in chronological order, which allowed me to piece together Edward’s life, along with all the other typical records such as birth, marriage, death, and census records:

This event probably haunted my g-g-grandfather for the rest of his life, as Peter Martin was only 14 years old, and Wm. Ely, lying on his deathbed, breathed his last just minutes after his fiancé arrived at his side.  Edward was also severely burned, but recovered.  Edward and Giles Blount were partially blamed for this explosion, and I know it deeply affected the direction of Edward’s career and life from that point forward.  In the 1880 census, I found him with friends of the family in Clearfield Co., PA.  In 1883, Edward’s mother passed away and he more than likely returned to Lykens to attend to his mother’s funeral and affairs.  Later on in life, Edward became an executive board member of District 9 of the United Mine Workers of America, and an advocate for mining safety.

I continued my search through the newspapers for my great-grandmother Jane S. (Harris) Miller.  She was married to Raymond E. Miller.  One of the most common items in older newspapers people may not be aware of when searching for female ancestors that were married, is newspapers used the husband’s first name in a formal format to distinguish a married female, like Mrs. John Smith.  Using that example garnered me a better result.

Using this criteria, Mrs. Raymond Miller or Mrs. R.E. Miller, along with the right location of Harrisburg, PA allowed me to find this important and unknown fact…

My great-grandfather and great-grandmother had another son before my grandfather, Ralph Miller, which none of the family ever knew about.  The reason for this secret was revealed when I went to Ancestry and looked for John Miller, born between 1909 and 1910 in Lykens: 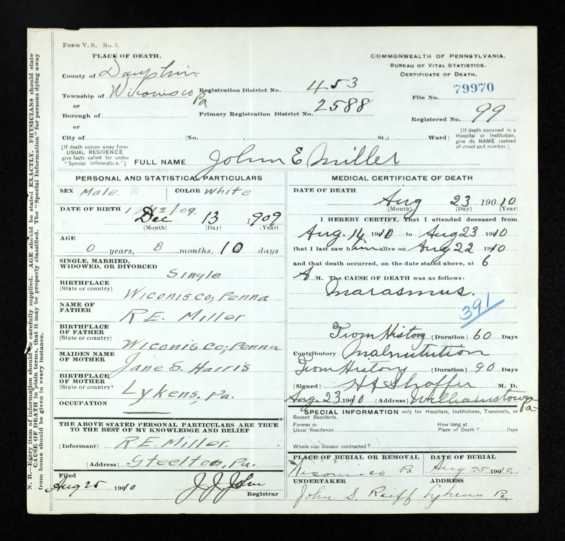 To this day, I do not know if my grandfather ever knew that he had a brother.

Another of my family mysteries, on my mother’s side, was my g-g-grandmother Annie (Bowers) Earp (1868-1900).  Essentially, there were only two records I could find for her…the 1870 census and the marriage record in 1888 of Annie Bowers to Edward E. Earp.  Annie’s father was one William Bowers, and he had a brother named Elijah.  On the marriage record, Annie’s named guardian was “Uncle, and have been in his charge, Elijah Bowers”.  The only other evidence of her existence was on Find-A-Grave.  Someone had created a memorial page for her, but had only the barest of information, and a picture of her headstone: 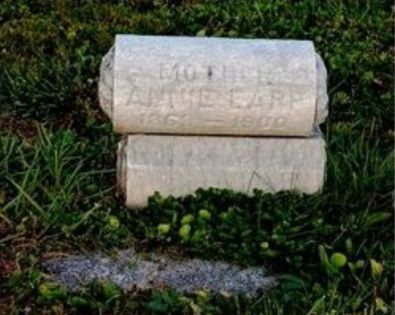 From that point on, I scoured Ancestry, FamilySearch and Newspapers for any additional information, only to be rewarded with zilch!

So I turned my attention to other family trees and just thought I’ll get back to this.

During my hiatus from this search, I discovered and learned many things about looking for my ancestors that gave my searching skills that edge they needed, and when I came back to this, I came back with an arsenal of tips and tricks to help me find Annie.  One of the things I learned was how many different spellings there were for the name Earp.  Here are just a few examples:

I decided to go to Newspapers first, because I knew that Annie had probably passed away before any death certificates in Pennsylvania were mandatory.  I used all the examples I had previously mentioned, and still came up with nothing…then I had a little brainstorm.  What if the last letter was not the letter P, but substituted with another one.  The first one that I figured could have possibly been substituted for the letter P, was the letter B.  So off I went, and this time my search struck gold, after 3 years of searching, I finally knew what had happened to Annie: 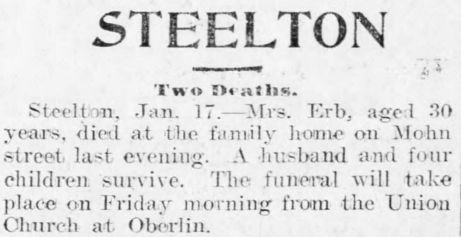 Further searching on the Earp family, I found this relating to my great-grandmother, Edna Earp.

Okay, all you bakers, you have 4 hours…on your mark, get set, BAKE!  Save me a piece!

Finally, one day I was just goofing around on Newspapers.com, and I was just curious about my mother, my aunts and uncles, so I just did some searching around.  My mother was born in 1936, so I just did a search on her given name and maiden name in Harrisburg, PA between 1936 and 1940.  Sometimes you are rewarded with the most special things that just come right out of left field, but I was fortunate enough to be able to find this and share it with my mother.

Below are some other Newspaper sites you may not be aware of.

Now get out there and find out what your ancestors were doing…you just might find a few surprises along the way.

All other images from Newspapers©, Ancestry© and Find-a-Grave©