In the last discussion, we talked about how accurate or inaccurate information being presented in historical and biographical books about our ancestors can be. I know of no other event of the 1800’s, that has had more wide-spread research papers and books written and published about than the Civil War has. Many of our ancestors born between the early 1800’s and the mid-1800’s fought during this tumultuous period in our Country’s history. I, myself, have had many ancestors that fought during this time.

Which now brings me to the topic at hand…Seaton Coleman, Jr. and his involvement with the Civil War based on the book “West Virginia and Its People, Vol. 2, Pages 413-414. 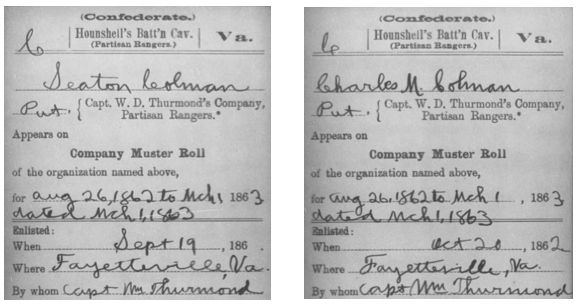 As you can see by the spelling of the surname, I did not find these documents immediately, but when I did, it gave me the information I needed to challenge the information given regarding Seaton Coleman, Jr. in the “West Virginia and Its People” book.

In the book, it clearly states “At the outbreak of the civil war he entered the Confederate service and during the progress of the war participated in a number of decisive battles. He was captured by the Union army and held in duress in the Lewisburg prison for several months but eventually escaped from that place by means of a tunnel that took him twelve days to dig.”

Let’s break this down logically, so there is no mistake regarding what is fact and what is fiction.

First, let’s look at some of the statements made in the book, and see how they hold up against actual historic events. Lewisburg Prison is stated as the place the Seaton Jr. was held for several months. After some careful research, I have found no evidence of a prison in Lewisburg that held Confederate POW soldiers. Does that mean there wasn’t, say a temporary prison camp at Lewisburg? It’s possible there may have been, but unlikely. Here’s why…

On May 23, 1862, months before Seaton Jr. and Charles enlisted, a battle took place at Lewisburg. It was a very decisive battle in favor of the Union. Led by Col. George Crook, the battle only lasting 27 minutes. All of the Confederate soldiers that were taken prisoners were taken to Camp Chase near Columbus, Ohio, who were later released in exchange for Union soldiers in September of 1862.

After the Battle of Lewisburg, Col. Crook was rapidly promoted, through the ranks, and then on Sept. 7, promoted to Brigadier-General of Volunteers.

”From October, 1862 to February, 1863, he (Gen. Crook) was engaged in clearing the State of West Virginia from guerillas and “bush-whackers”.* (Guerillas and bush-whackers were the very terms used to describe different companies of Confederate Partisan Rangers). 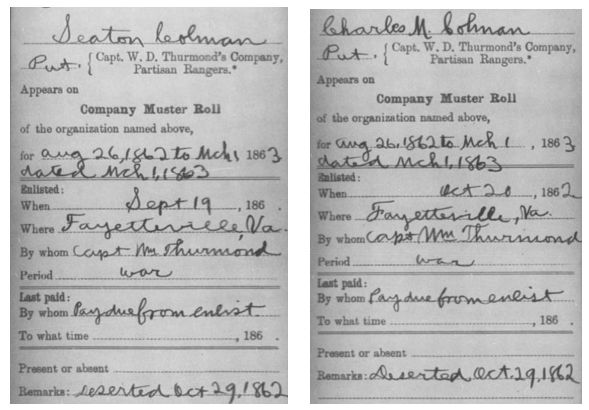 If you take a moment to think about it, this coincides directly with Gen. Crook’s campaign into West Virginia. Is it possible that Seaton Jr. was taken prisoner? Anything is possible, however, based on this information, it’s more likely that Seaton Jr. and Charles high tailed it back to their homes to protect their families and property, to try and preserve what they had, as was the case for many Confederate soldiers who were close to home, and home and family took priority over anything else.

So, did Seaton Coleman Jr. fight in any decisive battles?

The battles of the Civil War have been very well documented, and I found no evidence that there were any significant battles fought in this area of Virginia/West Virginia during the time frame of Seaton Jr.’s service.

To provide a contrast to the above challenges that confront any researcher, we can look into what a POW would have gone through during the Civil War, based on just the records. Another ancestor, on my wife’s paternal side, was Levi Nathan Deel. 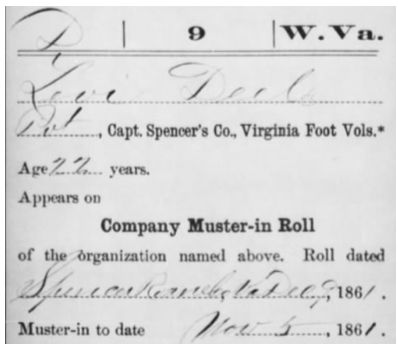 One of the most intense and heated battles in West Virginia was the Battle of Cloyd’s Mountain, near Dublin, Pulaski County, VA on May 9, 1864. Levi Nathan Deel was in the middle of this battle. The following are details of the battle.

The very same Brigadier General George Crook, as mentioned above, commanded the Union Army of West Virginia, made up of three brigades from the Division of the Kanawha. When Ulysses S. Grant launched his spring offensive of 1864, two Union armies marched towards Richmond and a third moved into the Shenandoah Valley. Crook’s troops were also involved in the offensive and began to march through the Appalachian Mountains into southwest Virginia. His objective was to destroy the Virginia & Tennessee Railroad, working in conjunction with William W. Averell’s offensive, which had similar objectives. Brig. Gen. Albert G. Jenkins was in command of the few scattered Confederate units protecting the rail lines. He had only assumed command only the day before Crook’s army began to approach the railroad.

Nevertheless, Jenkins was an experienced soldier. During the 1863 Gettysburg Campaign, Jenkins’ Brigade had formed the cavalry screen for Richard S. Ewell’s Second Corps. Jenkins led his men through the Cumberland Valley into Pennsylvania and seized Chambersburg, burning down nearby railroad structures and bridges. He accompanied Ewell’s column to Carlisle, briefly skirmishing with Union militia at the Battle of Sporting Hill near Harrisburg. During the Battle of Gettysburg, Jenkins was wounded on July 2 and missed the final day’s fighting. He did not recover to rejoin his command until autumn. Jenkins spent the early part of 1864 raising and organizing a large cavalry force for service in western Virginia. By May, he had been appointed Commander of the Department of Western Virginia with his headquarters at Dublin. As Gen. Crook’s armies advanced, Jenkins decided to make a stand at Cloyd’s Mountain.

Levi Nathan Deel was injured by a shot through his right shoulder and left behind on the battlefield. Below is the 1890 Special Schedule for Surviving Soldiers, Sailors and Marines, and Widows, Etc. Levi Deel is number 2. This is just another form of verification of Levi’s service and the disability he incurred. 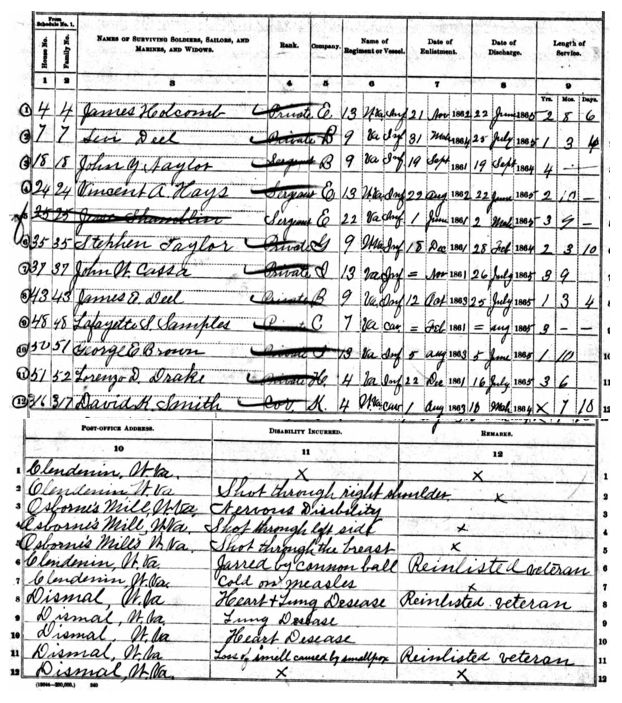 Levi’s brother, James E. Deel (also in the above schedule), was in the same company and regiment, but made it off the mountain.

Levi was captured and taken prisoner by the Confederate Army, and possibly taken to one of their POW camps (we’re not sure which one, but it’s possible he may have went to Andersonville first, based on some new articles I have read, but there is no verification of that fact). 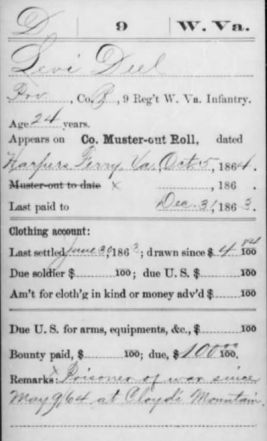 This is only 1 of 26 cards for Levi Deel. A portion of them mention him as a POW.

As you can see, without any articles being written about him, Levi Deel left a legacy behind that is based on the record of his service.

There are some interesting facts regarding the Battle of Cloyd’s Mountain, and another battle that followed the next day, the Battle of New River Bridge, that I wanted to pass on to those that would find them interesting.

Two future U.S. Presidents fought at the Battle of Cloyd’s Mountain…Colonel Rutherford B. Hayes, and one of his officers, Major William McKinley. Both serving under General George Crook.

The day after the Battle of Cloyd’s Mountain, on May 10, 1864, at the Battle of New River Bridge, the remaining Confederate troops unsuccessfully defended the railroad bridge over the nearby New River, near the still standing home of Dr. John B. Radford. In the melee, a union soldier who refused to take cover until Col. Rutherford B. Hayes did so, was mortally wounded.

*Hayes was quoted as saying “There was a large lime stone sinkhole,” says Hayes, “in which I ordered the men to lie down. All obeyed promptly except one dismounted cavalryman who in a pert and saucy way turned to me and said, “Why don’t you get off your horse and hide too?” On my repeating the order, the cavalryman replied, “I’ll get down, when you do.” Just as I was insisting on his obeying the order, a shell burst near us – the cavalryman was fatally and shockingly wounded and was then discovered to be a woman. She died almost instantly.”

Her identity was never discovered. She was 1 of only a few women known to have been killed in combat during the entire Civil War.

So, what can we learn from all of this…

I am dedicating this blog to those we honor this coming Memorial Day weekend.

Images taken from Ancestry.com and Fold3

Sources for the Battle of Cloyd’s Mountain and the Battle of New River Bridge from Wikipedia, The National Park Service CWSAC Battle Summaries, the Virginia Center for Civil War Studies, and the *Virginia Minerals publication, November 1997, Vol. 43, No. 4, Page 35, the Rutherford B. Hayes Presidential Library